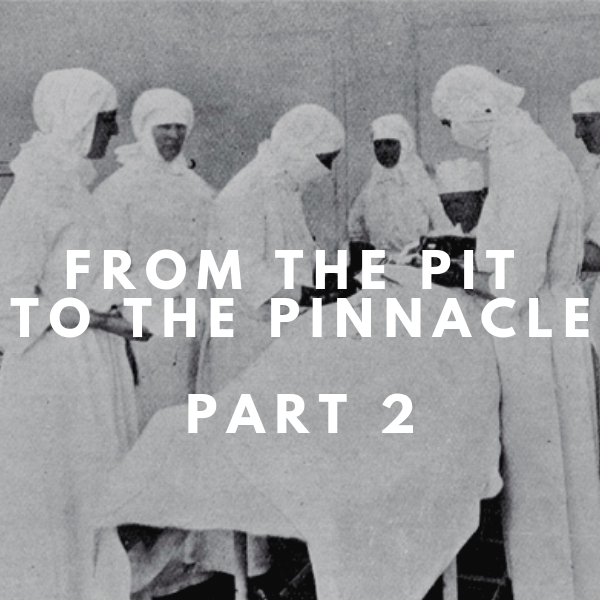 Previously on Semper Anticus blog… We are time-traveling 100 years back to 1919. It turns out that getting ill during such a trip is a very life-threatening experience. We have already covered two pessimistic scenarios – pneumonia with no antibiotics and myocardial infarction with no real treatment at all (link here). Let’s move on!

While myocardial infarction was not a likely condition to develop in the age group of most of our readers, the next one is. Imagine you have been excessively thirsty and hungry for the past couple of weeks and have been a frequent visitor of the restroom to empty your bladder. You have also been losing weight. Now you feel drowsy and have a weird fruity-smelling breath.

With this clinical picture you are brought to a good 1919 hospital doctor. Seeing what he probably has to deal with, he would confirm the presence of sugar, acetone and diacetic acid in your urine. A diagnosis of diabetes mellitus would be made. Back then it was not classified as Type 1 and Type 2 diabetes, but some fancy French terms were used instead – diabète maigre and diabète gras, also called acute and chronic forms. In this case we are dealing with the maigre or thin variety, as opposed to gras or fat.

“The younger the patients the less likely is recovery” is the counter-intuitive phrase regarding the prognosis of such patients in Osler’s textbook.

“In the disease may run a very rapid course, and death may occur within a few weeks, or a child may die in before the condition has been recognized.”

Today we know that Type 1 and Type 2 diabetes are very different clinical entities with the latter being common in the older and obese – it has a gradual onset and could be managed by dietary adjustments. Our case, however, would not be filled with optimism.

You would be put to bed and deprived of food for several days. If not, main attention would be paid to reducing fats. You would be allowed to freely drink water or sugarless tea or coffee to the amount of 1 litre every six hours. The aim would be to make your urine sugar free. If that failed, Osler’s textbook gives us suggestions of some dietary experiments that seem to be meant for milder cases or Type 2 diabetes. Again, your bowels would be “kept freely open” by the use mineral oil, senna or enema.

If you were too drowsy to drink enough yourself, fluid would be administered through the large bowel or by injections under the skin or intravenously with a syringe. If you would develop a rapid and deep pattern of breathing, the so-called air hunger or Kussmaul breathing, and your conscious state would decline further, the situation would become quite hopeless. Digitalis would be employed in case of failing circulation. Regarding medical treatment, the textbook states that “this is not satisfactory and there is no drug which appears to have a direct curative influence”. Opium or potassium bromide could be given to relieve agitation. The use of arsenic had also been recommended – it seems like they had a great affection for poisons back then. Injections of sodium bicarbonate to reduce acidity of the blood may have been offered. Overall, diabetic coma would have been a death sentence.

The problem was that the “drug which appears to have a direct curative influence” was introduced three years after the moment of our time-travel. It is called insulin – a major breakthrough in medicine. This vitally important hormone that controls glucose metabolism in the body is normally synthesized in beta cells of the pancreas. These cells are destroyed in Type I diabetes. The inventors of insulin were deservedly awarded the Nobel Prize in 1923. Firstly, it was available only as animal-sourced purified preparation, but subsequently synthetic and biosynthetic forms were developed. Nowadays, we have different types of short-acting and long-acting insulins used as subcutaneous (under the skin) injections every day in millions of diabetic people world-wide.

A trivial and highly possible condition to expect in a 1919 time-travel – diarrhea. Food was not stored in refrigerators (technically refrigerators for home and domestic use where invented in 1913 in the USA, but I wouldn’t put my money on finding one in 1919 Riga), war had just passed in Europe and was still going strong in the territory of Latvia with famine being a regular occurrence. You couldn’t be too picky in your dietary habits back then – a piece of meat from a dubious source, a block of cheese with a moldy corner or a bottle of milk that tastes somewhat more bitter and sour than the one you are used to buying in your local grocery store could be a luxurious part of your scanty meal. Fun fact – during war, counterfeit milk, composed partly of water mixed with talc, was an actual thing – selling it was punished with no mercy if authorities found out. Also, most domiciles did not have a water closet but sufficed to have a dry toilet in the backyard or staircase. Fresh water to rinse your hands with was in short supply, as were bactericidal soap or hand sanitizer in your pocket. With that in mind, it is quite clear that diarrhea could surprise your unaccustomed tummy at any moment.

If for some reason you decided to go along with the Red Army (go figure why – maybe you would’ve been taken hostage) back to Russia when they retreated from Riga, you could even get affected by the Sixth Cholera Pandemic.

Anyway, there you are, in 1919, having a watery diarrhea 20 times per day, stomach ache, nausea, vomiting, and fever. You feel very weak, dizzy, your mouth is dry, you feel like you could pass out. The toxins, viruses or bacteria from the food, water or your own dirty hands have gone down your gastrointestinal tract and wreak havoc in your bowels. Because of your nasty overall state, you are taken to a hospital and seen by a doctor.

In Osler’s textbook, the recommendations about watery diarrhea in adults are quite brief and incomprehensive – much more advice is given for children – they dehydrate much more easily and die for that matter.

Combining the offered approaches, you would be put to bed and allowed no food for at least 24 hours. Since “nature’s effort to remove the disturbing cause should be assisted, not checked”, castor oil and calomel (mercury chloride) might be used as purgatives, i.e., let’s get over with your diarrhea by stimulating it even more. Calomel does help to relieve vomiting – nowadays, however, more modern drugs would be used like metoclopramide or ondansetron. For children, the textbook recommends flushing stomach and large bowel with large quantities of water or salt solution.

If your vomiting and watery flux from the rear end was too unbearable (a situation called “choleraic diarrhea”, which is what we are talking about in this case), a hypodermic injection of morphine would be administered (when people receive opioid drugs like morphine for pain, a common side-effect is constipation, which was advantageously used for diarrhea back then). Morphine, laudanum (opium tincture) or spirit of chloroform could be used for stomach pain relief – a drug addict’s dream. If your diarrhea persisted, oral aromatic chalk powder or bismuth could be tried. The latter is still sometimes used today.

But what to do with the fact that you are losing large volumes of fluid down the toilet? “Water should be given freely by whichever method is indicated”, as well as “when there is much loss of fluid from the body or when toxic symptoms are marked infusion of normal salt solution under the skin should be tried” are decent recommendations. However, if diarrhea is massive and profuse vomiting prevents consuming adequate amounts of fluid, administration of fluid under the skin would probably not suffice. Remember that infusions of large fluid volumes intravenously were not yet a standard thing because of the lack of appropriate equipment.

In 20th century, gastrointestinal infections were the third leading cause of death in the United States – just behind pneumonia and influenza, and tuberculosis. 40% of dyers from all these infections were children under 5 years of age [1]. Odds of dying in case of our 1919 “choleraic diarrhea” were quite real.

Today diarrhea is not even in the top 10. How was that achieved? Obviously, the main reason was advances in sanitation and hygiene. Medically, however, the main problem that kills in diarrheal diseases is dehydration – loss of water and, importantly, electrolytes (salts and sugars dissolved in our blood). Osler’s textbook suggests fluid intake but does not yet emphasize it as the most important part of treatment. In 1940s, studies were done that proved the beneficial effect of intravenous infusions of sodium chloride, potassium and glucose solutions. People who would have ordinarily died from cholera could now be cured. Following more studies in 1960s and 1970s, oral rehydration therapy (ORT) principles were devised – appropriate compositions of glucose and salt solutions that worked well when introduced through mouth were developed [2]. These are now the cornerstone of fluid replacement in acute diarrhea. Only when they are not expected to be sufficient, intravenous route should be used.

Today common options for dealing with a watery diarrhea like that would be an ORT solution (most popular soluble powder in our pharmacies is called “Rehydron” – some people find it unpalatable, but I think it tastes quite well – keep a pack at home. By the way, you can make your own homemade solution too – link here: https://rehydrate.org/solutions/homemade.htm), intravenous therapy in a hospital setting if needed, some adsorbents like activated charcoal or diosmectite, antiemetics, and occasionally antibiotics for some specific bacterial causes.

Unfortunately, in the 21st century diarrheal disease is still the second leading cause of death in children under five years old killing around half a million of these children each year [3]. Obviously, that is the reality of underdeveloped countries were billions of people lack proper sanitation. Many of these half a million children could have lived if they received adequate oral or intravenous rehydration. Some parts of the world are still centuries behind.

Back to the future

Hopefully by now I have demonstrated to you that time-travelling is a dangerous business. We are in fact living in the best times of human history ever with our life expectancy and quality of life being unimaginably high for people living 100 years ago. The last century has given us fundamental advances in medicine like antibiotics, cardiopulmonary resuscitation, countless novel drugs, as well as introduction and refinement of many sophisticated surgical and invasive procedures that save lives on a daily basis. What was a death sentence 100 years ago is an easily manageable condition today. We have come from virtually no treatment at all to treating many diseases at a molecular level. Of course, today we face countless challenges that did not even exist a century ago like antibiotic resistance, HIV, obesity, allergies, aging population, pollution etc. But fear not – 100 years from now doctors will laugh at our inabilities today.