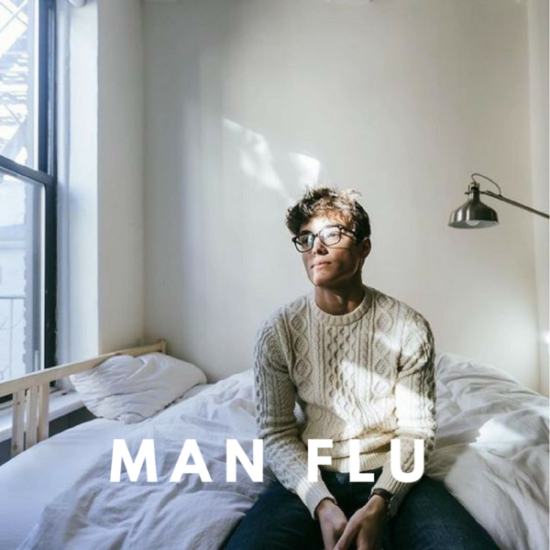 It’s winter and the time of year for the flu and colds to hit our immune systems with a vengeance.

But, have you ever heard the men in your life complaining incessantly when they have a cold? Maybe you’ve even noticed that this is usually more than the women. Perhaps you even wonder whether the men just complain more or the women are just far more able to ‘get on with it’.  The phenomenon you have seen is commonly known as ‘man-flu’.

“Man flu – an illness that causes the male to be helpless and sicker than any other family member. In females – a cold”

Man flu is best described in the Cambridge dictionary as “an illness such as a cold that is not serious, but that the person who has it treats as more serious, usually when this person is a man”. The example they give is: “John has a touch of man flu and he won’t get out of bed”.

What does the research suggest?

New research in Canada suggests that perhaps there is more to the myth than we had previously thought. Canadian researcher and general practitioner, Dr. Kyle Sue, noticed that he had more complaints from men coming in with a cold than women and that the women he knew would also mention that the men in their lives complained more than them. He decided to take action and constructed a literature review to work out whether the phenomenon really had some truth to it. He pooled a number of research articles and found that men seemed to be less responsive to the flu vaccine, which might suggest that they are more likely to get the flu and are less resistant to viral respiratory viruses.

Men also appeared to be more susceptible to pneumonia and other acute respiratory complications, which could lead to fatalities. Some research also suggested that men, in general, have a natural suppression of the body’s response to infection due to their testosterone levels. Meanwhile, oestrogen in women had more of a boosting effect on the body’s response to infection. This was also supported by research which suggested that pre-menopausal women had more efficient immune systems than women after menopause. However, the validity of this has not been confirmed as yet.

All of these reasons, according to Dr. Sue, mean that men might not actually be exaggerating their pain and symptoms quite as much as the ladies may think, and that they genuinely do suffer more. He also proposes that there may be an evolutionary advantage to having a weaker immune system. The diversion of energy from the energy-consuming activity of increasing the immune system means that men can invest their energy in other functions in the body.

What are the criticisms of the research?

There have been a number of individuals who have criticized the pooling of research constructed by Dr. Sue. They say that the research is not conclusive of the presence of “man-flu” itself and does not justify more complaining when a man is ill. Professor Stokes-Lampard, Chair of the Royal College of General Practitioners in the UK has criticised the idea of “man-flu” by reminding us that influenza is not sexist and does not attack one gender more than another.

Meanwhile, the respiratory tract infection advice that all the general practitioners seem to advise, regardless of your gender is, to rest at home, drink lots of fluids and if necessary, take over-the-counter medication e.g. paracetamol, if necessary.