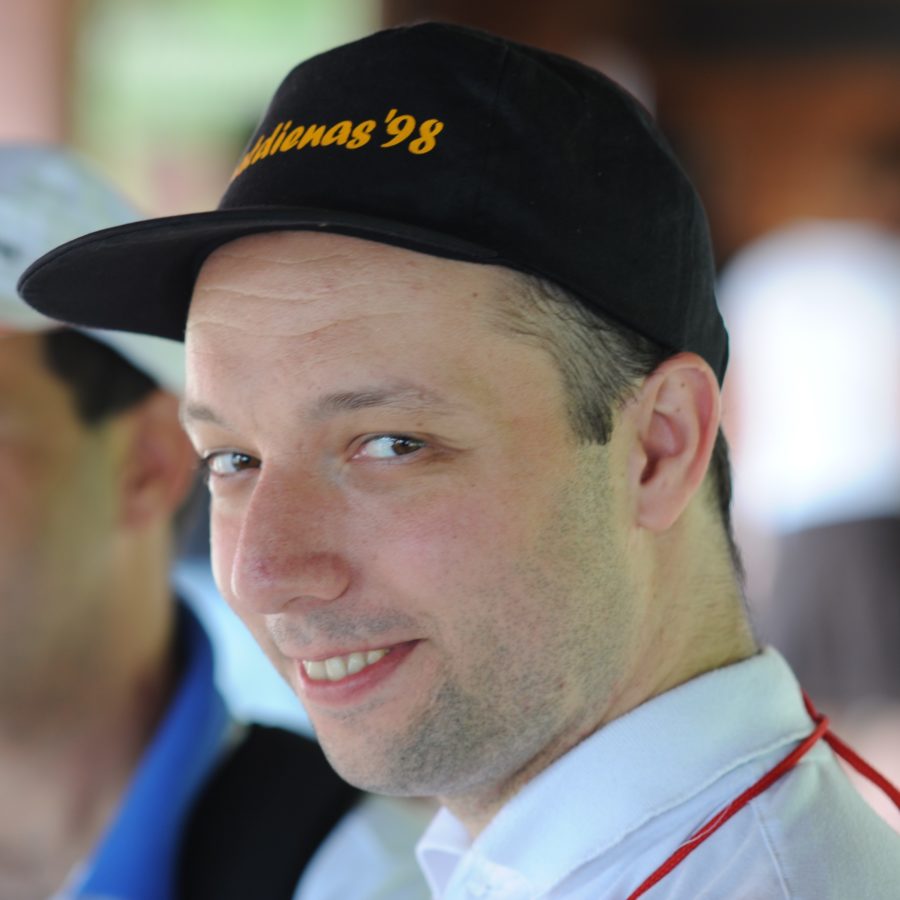 1. Do you believe in ghosts or ghost-like substances?

I see an option to disbelieve and take it until proven wrong. This, however, does not negate my belief in and does not lessen my respect to the authenticity of some stories of supernatural experience that people that I deeply trust have shared with me.

2. If you could fist-fight any dead scientist, why would it be Stephen Hawking?

It would be unethical for so many reasons! If given a choice, I would rather “fist-fight” intellectually with Bohr and Einstein. Would love to learn their reaction to the formulation and experimental refutation of Bell’s inequalities, and then just watch the debate.

The main rule is to have fun with them. There are different ways to engage, depending on age. One of the finest example of popularization of science (including theoretical physics) is a recent remake of the TV series “Cosmos”. With rare exceptions, young children are not good at abstract thinking and primarily grasp the world emotionally. Be an interesting person, tell stories on how theories have been discovered and how they matter in lives of people. Foster interest in math by age-appropriate games, puzzles and challenges. Once abstract thinking engages in full (roughly ages 12-15), make sure you saturate their curiosity and exponentially growing capacity for abstract learning.

4. Why is science so slow to adapt and/or explore new ideas such as gender fluidity?

Science is a social phenomenon with its own dynamics and flaws, even if we accept that it strives to study “objective reality”. Moreover, what is worth studying and why cannot be answered by science alone, and evolving preferences of the larger society that embeds and employs scientists will inevitably affect the choice of topics and methodology, in social sciences in particular. What you can do is to wait for a particular topic to become “fashionable” or engage in research yourself.

5. When does it make sense to split science into smaller categories?

I see specialization as inevitable evil stemming from immense accumulation of knowledge. In my domain of science, Lev Landau is believed to be the last physicist who was able to stay abreast of the most important developments across the whole of physics. He died in the sixties. In my view, the best individual strategy to combat compartmentalization of science is to acquire deep knowledge in at least two specialized domains and then “drill across” for synergies of multidisciplinarity.

6. What are your arguments against receiving government funding?

Depends very much on the domain and the funding mechanism. The key features of fundamental science — long-term view and serendipity – are very hard to sustain without public funds, hence I have nothing against democratic, transparent bottom-up funding schemes for basic research, like the programmes of the European Research Council. Risks of impartiality increase if a government is willing to fund certain types of research with an implicit or explicit promise to justify its political agenda. But the same risks apply to private / corporate funded research, so I am probably missing the point of your question.

7. How many scientists take psychedelics to advance their theories?

None that I know of. It is natural for creative people (which includes most scientists) to experience periods of intellectual frustration, and seek various ways to replenish their intuition, with lots of healthy and productive options.

Given appropriate context, I agree on this one. It is a very well-deserved caution from one of the great masters that quantum mechanics requires years of training your abstract thinking to be able to separate what is known and firmly established from the remaining challenges of interpretation (the infamous “measurement problem”). It is easy to get lost in seeming paradoxes without a solid mathematical foundation.

Travelling into the future is super easy at normal pace, possible to accelerate with some effort (read up in twin’s paradox). What is widely considered to be impossible (sans miracle-like acts of God), is time travel to the past, because of the implied violation of an extremely well-validated principle of relativity.

10. Do you believe that humans will be able to gather dark matter?

It is not a matter of belief, it is a matter of luck. If the dark matter takes part in interactions beyond gravity at a level within the realm of possible on human-earth scale, it is a matter of perseverance, patience and hard work. But there is no one to divine that “if”!

11. What’s the reasoning behind white holes?

The idea of a white hole in the theory of gravitation comes from a mathematical continuation of a black hole solution past an observable region into a similar object with spacetime flowing out of an “event horizon” (unstoppable expansion instead of collapse). Very loosely speaking it is like a south pole of a magnet which in the theory of magnetism must accompany each north pole. In contrast to magnetism, theoretical white holes are impossible to observe within known physics. People do like to explore exciting hypothetical ideas anyway.

12. How can you know if reality is real?

You can’t. For example, solipsim as a philosophical position is irrefutable from within – you can always deny reality no matter what arguments are presented if you assert that only your mind is real. Solipsism is not a very practical idea however, and most people find it useful to accept the existence of other subjects and agree on some basic criteria of objectivity. Typically, these are the ability to make repeated observations with the same conclusions such that different rational observers can reproduce them and agree upon “objective reality”. Simply put, a chair I see is objectively real if others can see it too. A set of objective phenomena thus defined would be a workable (but never complete or self-contained) definition of reality. In particular, such definition underlies the empiricism and the scientific method at the foundation of all sciences. Within this narrowed definition of “reality” your question becomes a tautology. Ontologically, however, there are always some fundamental philosophical choices that only you as a subject can make, and there will always be claims of reality of certain phenomena that can neither be confirmed nor refuted.

13. What is the current methodology for proving we aren’t living in a simulation?

There is none. The whole idea “we are living in a simulation”, in particular its recent resurrection by Nick Bostrom, is at best an exercise of science fiction fans rediscovering some aspects of philosophy and quantum mechanics. There are some speculations exploring imaginary scenarios along the lines – what if physics does not work the way it does, how would “simulator-limited” effects look like? As useful (or useless, depends on your perspective) as planning colonization of Mars. Just as with white holes (see answer #11) – no foreseeable connection to reality.

14. I would like to know what is the mechanism of instantaneous action at a distance. Is it possible that other theories aside from special relativity might explain this phenomenon? Thanks.

There is no instantaneous “action at a distance” (an immediate effect by a distant cause). Special relativity is an extremely well-tested feature of the physical world, and if action at a distance would at all be possible it would violate either special relativity (no evidence whatsoever) or causality (implying time-travel – a good idea for fiction but a dead-end for constructing physics theories). You may be confusing causal action at a distance with non-locality of a quantum state of entangled particles often misleadingly touted as “spooky action at a distance”.  Some type of information from a common origin of two quantum particles prepared in a special way (“entangled”) and travelling in opposite directions (with a speed bound by the speed of light) remains “delocalized” between them – this is what Einstein did not want to accept but was wrong (not all of his ideas about physics turned out to be right). See also answer #18.

15. Have you watched The Big Bang Theory?

Oh, yes I have! I’ve used to binge-watch it on trips outside Latvia, but Netflix has changed the rules recently and geoblocking of BBT now travels with me. So sad! One may agree or disagree with the sense of humour and the grotesque stereotypizations on the show, but what is objectively remarkable is the fact that notes on Sheldon’s board are always scientifically accurate and often relevant to the plot.

16. If you could swap any two senses you have, which would you swap?

I prefer not to tamper with my precious hardware. If forced to, I would look to minimize damage and swap smell with taste.

17. If you could ask yourself one question, what would you ask?

What is it that I like about the AMA format?

18. Is there something for you that you can’t explain to science, like a mystery or clue?

Life in general and your life in particular is a mystery. In general, science can explain very little for humans as persons which is what truly matters. Even putting aside the metaphysics and the questions of “why”, there is so much on the mechanical scientific level (“how”), especially about life processes and origin, that is unknown to science, and even unlikely to be ever knowable.

19. What is the most fascinating in physics for you?

How a few very tightly constrained mathematical principles lead to a practically complete quantities description of the physical reality. It a sacred experience to follow how a purely abstract theory (representation theory of the Lorentz group which embodies principles of quantum mechanics and relativity) leads to enumeration of all possible types of elementary particles. Nature or God or Providence then just ticks the right options form the list and fills in a dozen or so fine-tuned constants. I am absolutely fascinated that humankind is gifted with capability of grasping the workings of the fabric of the world at such an intimate level of detail.

On a much more trivial scale I draw inspiration from a similar source for my day-to-day work a physicist working on bits of electronic quantum technologies  – discovering and polishing little gems of mathematical knowledge that helps us think better about the real world out there.