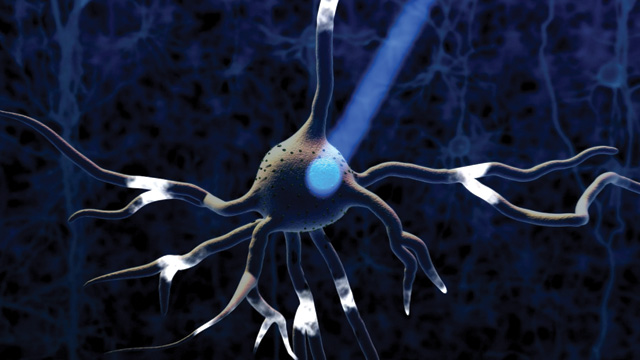 It is said that human brain is the most complex structure in the universe. If it is true then how can one investigate the numerous interconnecting neural circuits while they are buzzing with  impulses? It is not easy to manipulate activity of specific neural systems, especially when researching Alzheimer’s or Parkinson’s disease, where finding pathological changes in distinct circuits might help advancing treatment options.

Neurons can be excited by using electrodes or pharmaceuticals, however, these methods have difficulties targeting a specific neuron while not altering others. Surprisingly, a good method for individual neuron control is using light as an excitation/inhibition trigger. This is the main concept of optogenetics.

In 2005 a group of scientists from Stanford University published research where they made it possible to photo-stimulate mammalian neurons. It was done by introducing, protein naturally found in green algae, photosensitive ion channel channelrhodopsin-2 to neural cells by transporting the necessary gene to cell with a help of a virus. What that found was that when the genetically engineering was complete, and the new gene expressed channelrhodopsin, the cell can be excited by shining blue light upon it which now stimulates new channels making inward cation currents thus depolarizing neuron and inducing impulse.

‘’In next few years it was not only possible to turn on channelrhodopsin neurons with blue light, but also turning them off by stimulating halorhodopsin anion channels via yellow light.’’

It is even possible to erase memories using optogenetics, as  can be seen in the 2014 research from the Center for Neuroscience. Memories in mice are formed similar as humans where in learning process a distinctive pattern of activity establishes in cerebral cortex(ethorhinal cortex) which is coordinated, appropriated and later on retrieved by help of a connection with small deep brain structures called hippo-campus and amygdala. In this study mice where placed in a cage where they received mild electric shock. When they where placed there second time, it caused a fear response, however, mice whom had specific neurons in hippo-campus turned off, did not recall the unpleasant memories and explored the same cage without flinching in fear.

As much as forgetting traumatic events is needed in disorders like PTSD, recalling and being able to make new memories is necessary in diseases like Alzheimer’s. In a study done earlier in 2016 by scientists from Massachusetts Institute of Technology, mice with Alzheimers disease was treated using optogenetics. Mice with Alzheimers, as humans, cannot succesfuly make memories thus when placed in a cage where they were shocked last time, they don’t form fear response. ‘’After pulsing blue light upon connections between hippocampus and ethorhinal cortex it mimicked the natural process as memory was accessed repeatedly.’’  The dissections also showed positive results- changes of more connections between hippocampus and ethorhinal cortex.

‘’After pulsing blue light upon connections between hippocampus and ethorhinal cortex it mimicked the natural process as memory was accessed repeatedly.’’

Optogenetics has large variety of uses. It has already been used in studies to learn about treatment of Parkinson’s disease, analyzing anxiety pathways in the brain and even suppression of specific subregions to reveal causal role in face gender discrimination.

Because it is a relatively new method, optogenetics is only slowly adapting to human therapy. In February 2016 the first optogenetic therapy in humans started, hoping to restore vision to 15 people with severe retinitis pigmentosa by introducing opsin gene and making the retina able to receive stimulation from photons. In November 2015 a research on optogenetic therapy for humans with chronic pain launched. It has now received a 2.7 million US dollar contract for development of an implant or therapeutic treatment targeting neuropathic pain which could replace opioids.

Certainly, there is still much to learn about use of optogenetics in humans, although recent bloom of studies in this field shows us this method has a bright future.

203 replies on “ Illuminating the Brain via Optogenetics ”